The efficiency of the betting exchange markets

Modern economic theory determines that where there is a free market in which goods and services are freely tradable the market will generally determine a market price that is "efficient".

On modern betting exchanges the same forces exist. The betting exchange is simply a meeting of minds and opinions on which prices are formed. There is no obligation to accept the offered price and users are free to offer or accept whatever price they wish. This should lead to efficiency, But the question has to be, "Is the market efficient?"

Who is leading who?

There is much unresolved debate about who follows who on the betting exchanges. Do bookmakers lead the betting exchange price or do the betting exchanges lead the bookmakers? What forces shape and determine market prices is something that I have spent a lot of time studying to the point where I can determine with a much higher degree of accuracy than chance would suggest which direction odds are likely to move on a macro and broad basis. Not only which way but why and how. Some markets and situations are easy than others but rationale lies behind all. This discussion however is on the general efficiency in the market. In my research I needed to visit both ends of the spectrum to unifying macro and general prices and movements. The conclusion that I reached was that, in general, market is efficient.

Actual probability is derived from historic data taken from the exchange, in this case Betfair. All the odds that are offered are listed and a sum of all winners at those prices is counted and divided by a count of the times that the odds have occurred. For example if the odds of 2.00 received 5,000 winners and occurred 10,000 times we would calculate the actual probability as 5,000/10,000 or .50 representing 50%. 50% of the time odds of 2.00 produced a winner. This historical data represents the key data at all times in the market. I have not taken a snapshot of the market at any one point or used the SP or a default time to capture the odds. This is all odds offered at all times in the market. Incidentally, I have also studied when the market is most efficient, but that’s another story.

Of course, all winners on Betfair have to pay a commission so the final line is theprobability adjusted for the effect that commission has on odds. The general effect is to skew the odds offered against the users. This is where the exchange method of betting is clever. Because the user can back or lay many selections from one event and only pay commission on the winning outcome the user can mix and match risk in one event. This is because there are no commission costs on a loss, only a win and no transaction costs. This allows the user to take many positions and to even hedge out open positions before, during or at any point up to the finish of the event. If you could perform such feats on the stock market I am sure volumes would sky rocket.

I have extensive data from many markets but picked on horse racing. This was simply because of the volume. At the time of writing this document in early 2005 matched bets on horse racing on Betfair in the UK is running at around £500m a month. A sufficiently large sample set to use. The data shown here was taken from the November horse racing market. The graph only shows data for prices between 1.01 and 2.00. 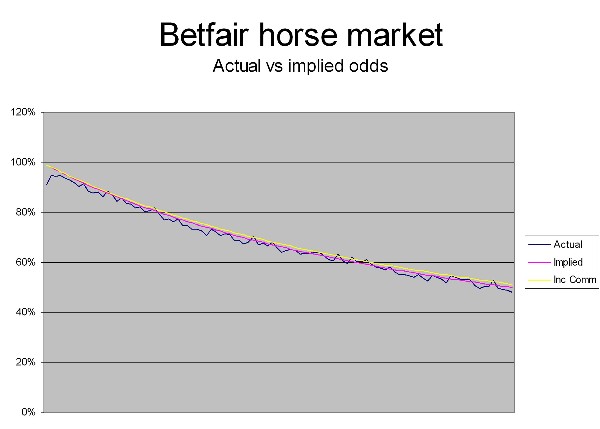 In the graph you can see that the implied probability is a nice curve, this is on the basis that the implied probability is perfect. For the underlying market you would expect to see a similar but bumpy curve on the basis of small levels of volatility in the market, in pricing and because of lack of equipartition. If I combined all the data I would expect the line would likely be smoother.

Because of the poorer odds available due to the effect of commission, you can see that the inclusive of commission line is higher than the implied line. Because the market is generally efficient and priced "tightly" the commission pushes you beyond any immediate value.

The most interesting line however is that of the actual occurrence of these events. You can see the implied line bisects the actual line on many occasions but more or less tracks it. The conclusion being that the market is pretty efficient at assessing accurate implied probabilities simply through the pricing mechanism available in the market place. If you pay 2.00 in digital odds (You accept odds with a 50% implied probability) the selection will, over time, come in around 50% of the time. The total average variance against all odds versus implied probability was small. A variation of 0.271%. This means that on average the difference between the odds you are seeing on the screen and the actually chance of the event happening is tiny. Much less than the commision you are likely to pay. On Betfair the lowest commision you can pay is 2%. Because it is paid on winnings only, this means the lowest effective rate is 1% (As you will win 50% of the time on average assuming the odds are evenly distributed). This leaves you, even if you qualified for the lowest rate of commision, with a net deficit of -0.729% on average, overall, over time.

There are the odd variances in at the short and long end of most markets I have studied. Suggesting the implied probabilities are not correct, fairy consistently. This may be due to over zealous "grabbing" of "free" money or people closing out their positions. It is likely to be caused by people backing low or laying high earlier than the true probability.

If your strategy is to make money by backing or laying something on the basis of "value" the statistics indicate that if you continue to do this over a long period of time you will likely only match the long term implied probability. Furthermore because of commission you will likely lose ; the only winner here is the service provider. Therefore the edge in the market does not belong to either side of the market, but to the betting exchange in the form of commission.

You have to conclude that in general the betting exchanges offer much better prices for users using broad backing or laying techniques. This occurs through the efficiency of the market as demonstrated by the fact that, in general, the implied probability matches the true probability of an event occurring. However, believing that that better price creates opportunity for gain by creating value is a false assumption and should be avoid.

Betfair would appear to be a beautiful demonstration of the efficiency of a freely tradable market. Of course if the government decides to tax it unfairly then the efficiency will be ruined.

A note about tax

Tax is not payable on gambling winnings. Why?

Most of this is based on the fact that betting markets are efficient as detailed in this document. At the end of the day if the market is efficient and the provider of the betting service is overround or taking a commision, this effectively pushes the punter into an inevitable loss making situation in aggregate to the benefit of the provider of the gambling service. While there may be pockets of people that have beaten the market these will be small and to the far right of the bell curve, the majority will lose. To only tax the individuals that win is folly. Also to tax individuals for gambling income would mean giving relief for losses and expenses. As we know, the aggregate of gamblers lose in total and this would mean the tax man providing relief for all. This is not a sensible situation at all from a tax collection perspective. Because the provider of the gambling services will almost certainly make a profit at the gamblers expense it makes better sense to enforce tax collection at this point where winning and taxable income is ensured.

A note about horses and horseless carriages

Horseless carriages (cars) were a neat invention. However despite the revolution that was going on they did not meet with universal approval. Horseless carriages were cumbersome contraptions and had been powered by steam engines as far back as the late 18th Century. They met great public resistance based upon two key isssues.

Rather than try to compete, stagecoach owners decided to cling to the existing state of affairs rather than identify that an irrevocable shift had occurred in transportation and their businesses.

Eventually, opponents to the horseless carriage succeeded in harassing experimenters and lobbying authorities and laws were passed forbidding the use of steam engines on roads. In England, stupidity triumphed when Parliament passed the Locomotive on Highways Act in 1865. Popularly referred to as the "Red Flag Law," it stipulated that all self-propelled vehicles on public highways be limited to a maximum speed of four miles per hour and be preceded by a man on foot carrying a red flag to warn oncoming horse-drawn vehicles. Although the law was amended in 1878, it still retained the speed limit and required two people to operate the vehicle and a third to go ahead at danger spots, like intersections, and give a warning. After eventually seeing sense the law was repealed in 1896 but not before other, more enterprising, countries had taken the advantage. Such laws were unknown in the United States and the rest as they say, is history.

I guess belief and understanding of the free market are two diametrically opposed forces certainly where vested interests are at play. Suffice to say that the UK and its attitude put paid, or at best, delayed the adoption one of the most important innovations of the recent times. This in turn delayed increased productivity and commerce. The government also lost out on the basis of the fact that failure to spot his shift meant new commerce did not generate new profits which did not generate tax income.

Market forces could not be resisted and eventually the UK lost initiative, supressed economic developement but eventually embraced the horseless carriage when it was obvious that it was actually a good idea.

In betting exchanges the UK has become a global leader in this new and exiting industry. Exchanges are a new paradigm and demonstrate destructive capitalism at its best. Without these break points in economic development we would not be using computers for fear of decimation of the pen and paper would we? Inevitably these break points cause short term distruption to business and tax revenues as the market adjusts to the new state of affairs. By over-regulating or attempting to punish the success of exchanges it could be possible to de-rail this progress. Progress that could lead global dominance by the UK in a new industry and one that could generate significant opportunities for UK PLC.

Despite my best efforts I don’t see many members of parliament currently using horses in London. But they do appear to use horseless carriages a lot. If they want to see the country prosper and develop they should learn to embrace and encourage new ventures rather than penalise them. Failure to do so should see all members of parliament adopt a drive to abandon the horseless carriage and move back to horses, to drop computers and adopt the pen and paper. If you fail to allow those things to progress and shape the world as they have done in the past you will fail to let the innovations of today shape tommorrow.